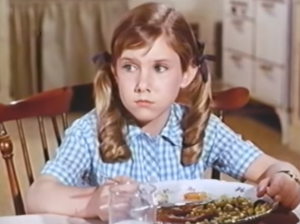 For millions of turkeys and those who care about animals, Thanksgiving Day is Thanks-GRIEVING Day.

When I was little, I ate turkey with my family at Thanksgiving. But it alarmed and upset me to watch my mother prepare the turkey. I recognized it as a dead bird, and the sight of its pale, cold skin with little pimples where the feathers had been pulled out made me cringe, and watching my mother stuff the bird’s bloody organs with fistfuls of breadcrumbs into the gaping hole where its head used to be made me feel ill. It saddens me that, when the turkey was served, I was able to put those images out of my mind and dig in. Of course, I was a child then and didn’t know any better.

This Thanksgiving, some 40-50 million turkeys will be murdered and eaten. Millions more will be slaughtered a month later to celebrate a season dedicated to peace and good will. How sad and ironic.

Turkeys are beautiful, intelligent, and sensitive birds. Under natural conditions, turkey hens are devoted mothers who care diligently for their babies. They are fiercely protective of their young and will risk their lives to save their babies. Male turkeys, called toms, have beautiful feathers they love to show off. Toms at sanctuaries are known to follow busy human caretakers from chore to chore, puffing out their feathers in a blast of scalloped ruffles, patiently waiting to be noticed and admired. 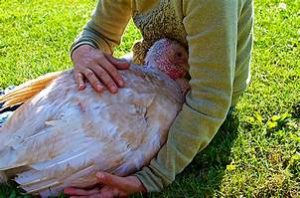 Did you know that turkeys love to be petted? Turkeys make very affectionate animal friends. When they feel love and trust, many turkeys make a sound that can only be described as “purring.” Turkeys rescued by sanctuaries, even those who have known great cruelty at human hands, will happily sit for hours having their tummy rubbed. 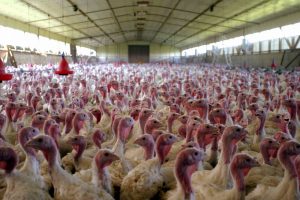 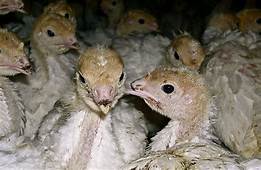 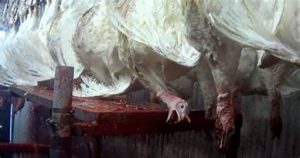 Before a turkey arrives in your grocer’s freezer case, they are forced through several stations along a gruesome assembly line at the slaughterhouse. The process begins by shackling the birds by their feet before dragging them upside down through an electrified water bath designed to stun them. From there their throats are cut by an automated blade. But this assembly line of death moves so quickly that many of the turkeys are not properly stunned. Still flapping and writhing, they miss the blade, and remain alive as they and those before them are dropped into the scalding tank, designed to loosen their feathers for easy removal. Any turkeys who have survived to this point are boiled alive.

Festive? No. Can mutilation, torture, and death bespeak thankfulness, home, or family? As compassionate people, can’t we reevaluate the systematic suffering and merciless killing of billions of animals in the name of tradition?

Now that you know the truth behind a Thanks-Grieving dinner, here’s a short, uplifting video about Hildy, a turkey rescued from a commercial farm who was lucky enough to live out her life with people who loved her.