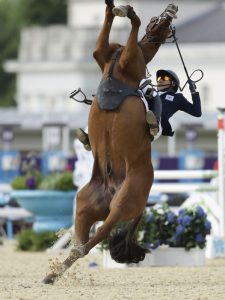 The Olympic Games are allegedly about encouraging peace, mutual understanding, and respect through sporting competition. Sadly, this respect is not extended to the animal athletes. While humans like Simone Biles got lots of media coverage and sympathy for her emotional struggles, little attention was paid to horses being badly abused or, in one tragic instance, dying in competition.

Equestrian sport has a long history of callousness. Two years before the London 2012 Olympics, a video emerged of a training method – the rollkur technique – that even a leading dressage coach admitted was “vile” and “cruel.” It involves drawing the horse’s neck round in a deep curve so that its nose almost touches its chest. The video in question showed a rider warming up his horse for a sustained period of time in the position, with the horse’s tongue appearing to loll out and go blue. After debate about the issue at the time, the Fédération Equestre Internationale (FEI) condemned the practice.

In 2002, a report from the Daily Telegraph which detailed “frequent incidents of violence” against dressage horses at competitions, including attacks that left horses with “torn mouths and bloodied flanks”, plagued the industry for years, although issues on this scale haven’t been widely reported for some time. The attacks – which were unconnected to the Tokyo Olympics – included riders whipping, beating and kicking horses. Some used spurs to cut the skin of the horses or wrenched the bridle as punishment after the horse failed to trot in the way the rider wanted.

Equipment used in equestrian sport – such as nosebands, spurs and shock collars – are intended to cause horses pain and discomfort to horses and make them compliant. Training methods can also cause lameness and other long-term injury to their bodies and minds. Let’s be real: dressage is the equivalent of breaking a horse’s spirit to force it to perform unnatural tricks for humans. 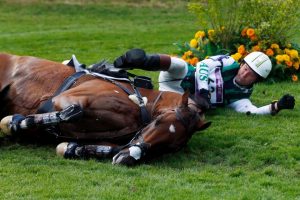 When it comes to dressage in particular, people will tell you that horses cannot be forced to do things they don’t want to, that they’re too big and strong to be bullied. But circuses have shown us that even tigers, elephants and bears can be forced to do all sorts of things they hate or fear while appearing “happy” to audiences.

The world got a rare peek at the cruelty behind the equestrian competition at this year’s Olympic Games when German pentathlon team coach Kim Raisner was disqualified and sent home after she punched a frightened horse. The entire show jumping component of the women’s pentathlon was excruciating to watch. Terrified horses, nervous, emotional riders, and complete, utter disregard for animal welfare. Several riders fell, as horses refused jumps and bucked in protest.

It was the cross-country competition (part of the eventing discipline) that saw the most tragic outcome. A horse named Jet Set on the Swiss eventing team was killed after appearing lame at a fence in the middle of the course. 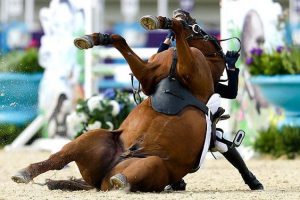 All riders know that of all the equestrian disciplines, eventing — in particular the cross-country component — is the most dangerous. Eventing has been labelled THE most dangerous sport in the Olympics, and that is not an exaggeration. In a short year and a half between 2007 and 2008, 12 riders died while competing in eventing. Between 1993 and 2019, 71 eventing riders died, 69 while competing, and 2 more while training or warming up for competition. Of the 69 riders that died competing, only three deaths were not at the jump. But riders choose to take these risks. Horses do not.

Jet Set, the Swiss horse who was killed, is not the first competition fatality. In 2008, a 10-year-old mare Tsunami II died after she somersaulted over a hedge and broke her neck. Later that year, Olympic horse Call Again Cavalier broke his leg in competition and was killed. A year later, an American horse named Bailey Wick died after landing on his neck after a jump. In 2010, Porloe Alvin flipped over a jump and broke his back. He died, too. In 2012, a horse named Sugoi broke his neck and died.

The sport treats injuries and fatalities as a tragic but sometimes unavoidable outcome. Jet Set’s rider Robin Godel said on Instagram that the horse “passed while doing what he loved most: galloping and jumping obstacles.” Did he, or are humans just putting a sentimental spin on animal cruelty?

The latest Olympic Games had numerous lessons for those who care about animals. The biggest lesson of all is that it’s time for equestrian sports to be dropped from the Olympics.