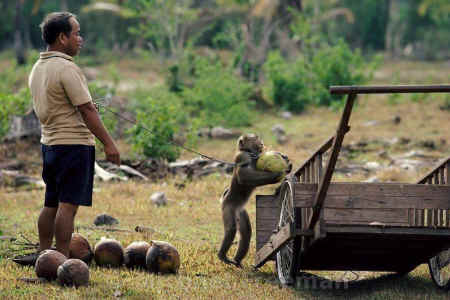 More and more compassionate people are choosing plant-based alternatives to cow’s milk because they don’t want to support cruelty to animals. These alternative milks, including almond, soy, oat, walnut, and others, are all easy to find, delicious, and cruelty free. But if coconut milk is your choice, there is something you must know. Recent investigations have revealed that one of the world’s major suppliers of coconuts, Thailand, is packing cruelty into every crate of coconuts. Ninety-nine percent of the coconuts harvested in that country are being picked by monkey slave labor – terrified, young pig-tailed macaques who are kept chained, abusively trained, and forced to climb trees to pick coconuts. Because of this, many retailers and food companies are now refusing to buy milk, meat, flour, and oil derived from Thai coconuts.

Coconuts from other parts of the world, including Brazil, Columbia, India, the Philippines, and Hawaii, are harvested using willing human tree-climbers, tractor-mounted hydraulic elevators, rope or platform systems, or ladders. Coconut water typically comes from coconuts grown on dwarf trees, including the Nam Hom variety, so harvesting them doesn’t require anyone, human or non-human, to climb to great heights. 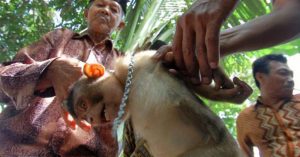 In Thailand, the pig-tailed macaques are illegally abducted from their families and homes when they’re just babies. They’re fitted with rigid metal collars and kept chained or tethered, or locked inside cramped and filthy cages with no shelter from the rain. Denied the ability to move around, socialize, or do anything else that makes their lives worth living, these intelligent animals soon exhibit behavior indicative of extreme stress, endlessly pacing and circling. Monkeys who try to free or defend themselves have their canine teeth pulled.

These captive monkeys are forced to learn how to perform difficult tasks, such as twisting heavy coconuts until they fall off the trees from a great height. Tethered by the neck with a metal collar, they are forced to climb up and down trees and collect between 1,000 and 1,600 coconuts per day; a skilled human can pick about 80. Sometime the monkeys grow so tired ofrom picking coconuts that they faint. Those who fall from the 50-foot trees and are injured are no longer useful to the coconut industry; they are killed. 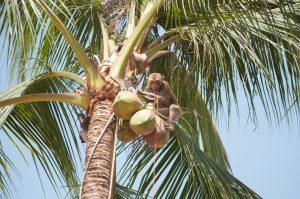 To earn more money off the captive monkeys, trainers at Thailand’s so-called “monkey schools” force their prisoners to participate in circus-style shows by riding bicycles, shooting basketballs, and performing other confusing and demeaning tricks in front of paying visitors.

Increasing numbers of consumers are speaking with their wallets, and retailers are listening. US supermarket chains Giant Food, Food Lion, Stop & Shop, and retailers like Bed, Bath, & Beyond, World Market, Walgreens, and Duane Reade, have pledged not to stock coconut food and drink of Thai origin. If you’re reading this in the UK, Morrisons, Sainsbury’s, Asda, Tesco, Ocado, Waitrose, Co-op, and Boots have done the same. Retailers in Germany and the Netherlands have joined in the pledge. Worldwide, more than 17,000 stores now refuse to buy any coconut products derived from monkey labor.

If you buy coconut milk, oil, flour, meat, or other products, be sure to check the country of origin of what you buy. If it’s from Thailand, don’t buy it. There is a good chance the purchase price is supporting animal cruelty.

As a shopping guide, the following companies affirm that the products they sell DO NOT derive from coconuts picked by monkeys: 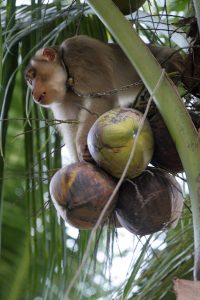 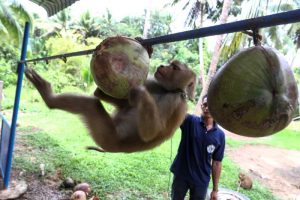 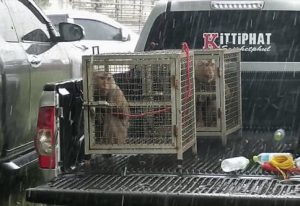