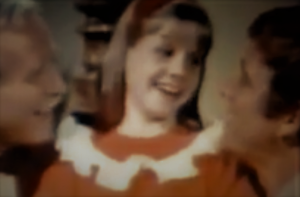 Here’s a photo of me with Arthur O’Connell and Monte Markham from a Christmas episode of the sitcom, “The Second Hundred Years.” In the 1967 episode I played a girl ashamed to admit she couldn’t go to a Christmas party because her single working mother couldn’t afford to buy her a party dress. In the end she is given the gift of a beautiful red velvet party dress, complete with white gloves and a wrap. I received a gift, too. After we filmed the episode, the dress, which had been custom-made for me by the wardrobe department, was given to me to keep. I was thrilled – I so loved that dress. That gift made me happy, but not all gifts turn out the way we intend. Today I know that some gifts people give out of the goodness of their heart result in the suffering and death of humans and non-human animals.

During the holiday gift-giving season, a popular choice for gift donations are programs that send live farm animals as “gifts,” ostensibly to help alleviate hunger and poverty in low-income countries. The reality is, animal gifting typically fails to help those groups, but actually cause harm. The most well-known soliciting organization, Heifer International, is one of the worst offenders. Heifer International would like you to think your donation gives a lift to impoverished peoples when it does just the opposite.  Here’s why:

MOST DAIRY ANIMAL RECIPIENTS ARE LACTOSE INTOLERANT AND HARMED BY DAIRY.

75% of the world is lactose-intolerant, and 90% of Asian and African populations are lactose intolerant. Increased dairy production is frequently touted as one of the greatest successes of animal gifting programs. But, in reality, dairy programs negatively affect the health, well-being, and productivity of people in lactose intolerant populations.

Consuming milk from other animals is also associated with allergies, asthma, and a host of autoimmune disorders. Most mammals, including humans, become lactose intolerant after weaning. Milk is very specifically created for infants, not adults. Furthermore, there is no need for humans to consume the milk of other animals. The resources used to produce dairy ought to be spent on alternatives that provide a higher quality and quantity of calories, protein and calcium.

While animal gifting programs seem to focus on small-scale farming, they have extremely large-scale implications that pave the way for factory farming, and exponentially increase consumption of meat, dairy and eggs throughout entire countries and beyond. For example, Heifer International is largely considered responsible for the kick-off of industrialized dairy in Japan after World War II. Heifer International boasts that their projects produced 3.6 million gallons of milk in one year in Uganda, and developed a national dairy program in Tanzania. These massive programs were developed despite the fact that 90% of Asian and African populations are lactose intolerant. Who is being helped here?

MORE FARMED ANIMALS DOES NOT EQUATE TO LESS HUNGER.

Instead of using precious food, water, topsoil, and massive amounts of land and energy to raise livestock, Ethiopia, for instance, could grow teff, an ancient and extremely nutritious grain grown in that country for the past 20,000 to 30,000 years. Teff is very high in protein, with an excellent amino acid profile, and is high in fiber and calcium – one cup of teff provides more calcium than a cup of milk – and is a rich source of boron, copper, phosphorus, zinc, and iron. Researchers have found that teff can be grown by farmers at a yield of 2,000 to 3,000 pounds per acre, with more sustainable growing techniques employed and no water irrigation. Teff has been shown to grow well in water-stressed areas and it is pest resistant.

FARMED ANIMALS DO NOT JUST “LIVE OFF THE LAND.”

Animal gifting organizations such as Heifer International promote inherently water-intensive animal farming, even in areas where water is scarce. Raising animals for food requires up to 10 times more water than growing crops for direct consumption. Additionally, in many arid communities, water is only available from a communal well or reservoir, in which case hydrating animals is a labor-intensive process for adults and children who must travel by foot and can only carry so much. Because of this, hundreds of thousands of animals die a slow death from dehydration.

Many gifted animals suffer from confinement, neglect, malnutrition, and lack of protection from weather and temperature extremes. Animals also endure horrific slaughter processes and long-distance transport where they are literally forced to lie down and tied with heavy rope so they can’t get up and die miserable deaths during transport.

Heifer International spent more than $22 million for printing, distribution, processing, and other fundraising-related costs. That’s $22 million from donations that could have been spent on fighting hunger and poverty and promoting health and education.

THERE ARE BETTER FEEDING PROGRAMS AND GIFT DONATION PROGRAMS. 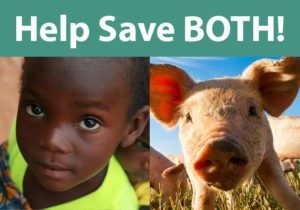 A Well Fed World sends 100% of your donation to four hand-picked groups with low overhead and proven successes in high-need areas. These hunger relief projects provide both immediate assistance and long-term community solutions that feed families without harming animals. They make it easy with one tax-letter, gift card and present (http://awfw.org/gifts/). You may also choose to give directly to these groups or choose from their grants list.

Three other organizations that do essential work and which I can personally vouch for are:

People for the Ethical Treatment of Animals (PETA) (www.peta.org)

I encourage you to visit their websites, learn about those organizations and their work, and make a donation if you can.