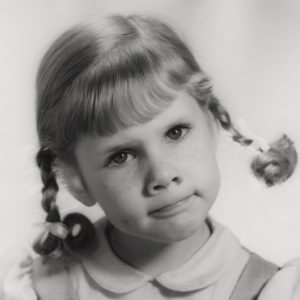 As a very young child I had a speech impediment. It was a developmental impediment shared by many children, but as an actor it sometimes put me at a disadvantage – except for one time when it turned out not to be a liability, but an asset.

Cast in a commercial for Swanson’s frozen turkey dinners, I struggled with all the R’s in the name of the product. My big line in the commercial came when I was to look up at the actress playing my mother and ask, “May I have some more turkey, please?” Try my hardest, the best I could do was “May I have some maw tuhkey, please?” Expecting to be admonished for messing up the line, I was surprised and relieved when the director thought my delivery was adorable. Not only did he and Swanson’s keep the line in the commercial, they cast me in two more commercials, provided I spoke the line just the same way.

At the time, I thought of turkey as something that came in a tin foil tray or surrounded by stuffing on a platter at holiday time. I had no idea that turkeys are beautiful, intelligent, and loving birds. Neither did I know of the excruciatingly painful lives they lead at factory farms or on oxymoronically-named “humanely-raised” farms.

Turkeys are very family oriented. In natural conditions, turkey hens are devoted mothers who care diligently for their babies. Young turkeys, known as poults, learn crucial survival information from their mother, including what to eat, how to avoid predators, the layout of the home range, and important social behavior.

Turkeys like to eat breakfast and dinner together as a family. They have two main meal times, one mid-morning, the other mid-afternoon. Family units often come together for meals.

Mother turkeys are fiercely protective of their young, and will risk their lives to save their babies. If she senses a threat, a mother turkey sounds a specific warning cry to her brood that means only one thing: run for cover. She may also attack, or pretend to be wounded to distract the predator from her offspring.

When trust has been established, turkeys love to be stroked, snuggled and petted for long periods of time. When receiving such affection, many turkeys make a sound that can only be described as “purring.” Turkeys rescued by sanctuaries, even those who have known great cruelty at human hands, will happily sit for hours having their tummy rubbed.

Turkeys enjoy listening to music, especially classical, and will often sing along!

It is difficult to sneak up on a turkey. They have excellent vision and hearing, even though they have no external ears.

Male turkeys, called toms, love to feel noticed and admired. Toms at sanctuaries are known to follow busy human caretakers from chore to chore, standing off to the side, puffing out their exquisite feathers in a blast of scalloped ruffles, quietly and patiently anticipating the prospect for attention.

Turkeys have been bred to grow so fast and to become so heavy that their bones are too weak to support their weight. They suffer from leg deformities, arthritis and joint pain just in their first few months of life, resulting in lameness so severe that they are sometimes forced to walk on their wings to reach food and water.

Commercial turkeys are artificially inseminated. the industry euphemism for roughly restraining female turkeys, turning them upside down, and violently shoving tubes or syringes of semen into their vaginas.

Turkeys are packed into long, windowless buildings by the thousands. Much like chickens bred for their meat, turkeys are overcrowded on floor systems and forced to live in their own waste. Breathing ammonia fumes and irritating dust causes them to develop respiratory diseases; forced to live in their own urine and excrement, they develop grossly ulcerated feet, blistered breasts, and ammonia-burned eyes and throats.

Although turkeys have claws, if they are treated with kindness and given plenty of space, they will not use their claws against others. With the tremendous overcrowding and brutal handling at commercial turkey farms, stressed turkeys use their thick nails to defend themselves. Because of this, turkey farmers use shears to cut off – without anesthesia – not just the nails, but the first and second section of the turkey’s toes so they will not grow back. Disregard what you may believe about “humane” farms or “free-range” turkeys; the same painful surgery is performed on those birds. The open wounds often get infected and swell, making it incredibly painful for the turkeys to walk. I’ve visited with rescued turkeys at sanctuaries and seen for myself their terribly deformed feet and the swollen stumps of what used to be their toes.

The similarly cruel practice of debeaking is also routinely performed, in which a large portion of the beak is burned off while the turkeys are still chicks. Debeaking is performed using sharp shears, a heated blade, or a high-voltage electrical current. Turkeys’ beaks are loaded with sensory receptors, much like human fingertips, and this painful procedure severs and exposes nerves. Some turkeys starve to death before they are able to eat again; others die of shock on the spot. Not only are debeaked turkeys painfully mutilated, but turkeys use their beaks to preen, to groom, to peck and to eat, natural activities impossible with a disfigured beak, and the cause of lifelong suffering for those who survive the procedure. 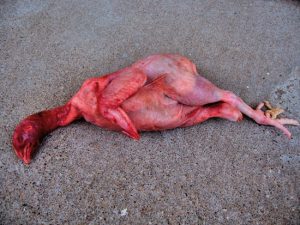 At the slaughterhouse, turkeys are shackled by their feet and dragged upside down through an electrified water bath designed to stun them before their throats are cut. But in commercial slaughterhouses, the killing lines move so quickly that many of the turkeys are not properly stunned. The next station consists of an automated blade that cuts their throats as they pass by, so that the turkeys slowly bleed to death. Those turkeys not properly stunned suffer a slow, painful death or continue to flap and writhe, and miss the blade. Tens of thousands of fully conscious turkeys whose throats were not slit proceed to the next station on the assembly line – the scalding tank, which loosens their feathers for removal. Those turkeys who survived are boiled alive.

I urge you watch these short clips I have personally selected, then continue on to learn about some delicious alternatives to serving the flesh of this noble bird this holiday season.

The first is a wonderfully uplifting short video about Hildy, a turkey rescued from a commercial farm who was lucky enough to live out her life with people who loved her:

There are numerous delicious vegan options for holiday entrees, such as Tofurky Roast, Field Roast’s Celebration Roast, and Gardein’s Savory Stuffed Turk’y, just to name a few. A stuffed pumpkin or other large squash can also make a beautiful main course. All the traditional side dishes can be made vegan easily with non-dairy milks and other plant-based alternatives. There is even vegan eggnog, and I can personally attest that it is delightful! More info about these yummy alternatives follow.

Please remember, it’s not just turkeys who suffer and die needlessly. Nearly 10 billion land animals are slaughtered for food every year in the U.S. alone. Three million of those animals are young dairy cows killed when their overworked bodies stop producing as much milk. Please visit this Guide to Going Dairy Free (https://freefromharm.org/food-products/your-guide-to-going-dairy-free-plant-based-milks-cheeses-and-more/) to learn about amazing plant-based milks, whipped creams, cheeses, yogurts and much more. And please learn more about the cruel dairy industry here: https://freefromharm.org/videos/farm-animal-investigations/the-spiked-nose-ring-a-symbol-for-all-dairy-cruelty/

Now, whether you’re looking for store-bought, order-online, or make-your-own options, it’s easy and delicious to veganize your favorite holiday main dishes. Here are just a few:

Trader Joe’s Breaded Turkey-Less Roast is so delicious! This is actually my favorite of all of the turkey alternatives I have tried. It’s delicious, and a bargain! Here’s how Trader Joe’s describes it: “A few years back, we teamed up with innovators in healthy and convenient, plant-based foods to create a turkey-less stuffed roast. Made with seasoned soy protein and organic ancient grain flour, it was touted for its remarkable texture and flavor. But rest on our roasts, we do not. Driven to make this main course as delicious and desirable as possible, we’ve punched up the wild rice stuffing with bursts of cranberries and coated the roast in crispy breading, seasoned with herbs and red pepper flakes. Now breaded, our Turkey-less Stuffed Roast with Gravy has never tasted or looked better.”

Gardein Holiday Roast. The deservedly popular plant-based meats company, Gardein, offers a knock-your-socks-off-delicious vegan Holiday Roast. Look for it in the frozen section of your grocery store. Many retailers like Target and Wal-Mart carry Gardein products as well. You can also ask your store to order the product for you. Visit the Gardein site to find out which stores nearest you carry their foods. http://gardein.com/products/#where-to-buy

The Pardon, from No Evil Foods. Now shipping nationwide in the U.S., The Pardon, from the popular plant-based meats company No Evil Foods in Asheville, NC, is a savory, hand-crafted artisanal plant-based roast. Once baked, the herb-rubbed exterior takes on a crispy, golden-brown sheen that breaks through to tender, succulent, juicy plant meat. This protein-packed roast carves magnificently, and the combination of ingredients and technique allow The Pardon to uniquely recreate the experience of eating a traditional turkey dinner, without any of the cruelty. The Pardon serves eight and runs $25. http://www.noevilfoods.com/product/preorder-meats-of-strength-the-pardon-mail-order/

Vegan Herb Roasted Chik’n from The Gentle Chef Cookbook. Check out this mouth-watering recipe gallery from Chef Skye-Michael Conroy’s The Gentle Chef Cookbook. Chef Conroy has pretty much veganized every meat, egg, and cheese dish on the planet, in an effort to make it as easy (and delicious) as possible for animal food lovers to go vegan without feeling deprived. His plant-based meat recipes are made from seitan, and include easy, step-by-step instructions for all the traditional holiday meat centerpieces, including vegan versions of Baked Ham, Herb Roasted Chicken, and Carving Board Roast Turkey. Other recipes include vegan bacon, sausage, sandwich meat slices, nuggets, meatballs… the list goes on and on. See for yourself! http://thegentlechef.com/SeitanandBeyondImages.php