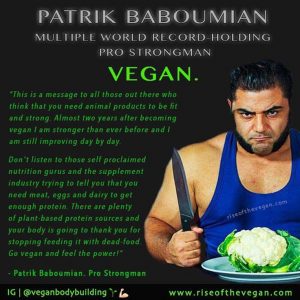 You owe it to yourself and your health to see this amazing documentary, currently streaming on Netflix and available on DVD. Read my earlier essay on my webpage by clicking this link.
Pamelyn Ferdin Essays by Pamelyn December 21, 2019October 3, 2020diet, Game Changers, Patrik Baboumian, sports, veganism 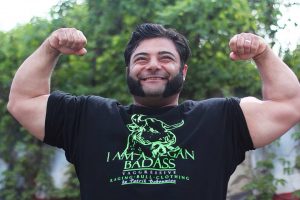 Happy Holidays to all my fans! Looking for a great movie to watch before shopping for the big holiday dinner? I’m really excited about the Netflix documentary “Game Changers” and a recent USA Today article that are both changing the public face of veganism. Now that elite athletes are “going vegan,” people are realizing just how important eating a plan- based diet is for health, stamina and recovery from injuries and inflammation. “Game Changers” is produced by James Cameron, Arnold Schwarzenegger, Jackie Chan, Lewis Hamilton, Novak Djokovic, Chris Paul, Joseph Pace, and James Wilks. 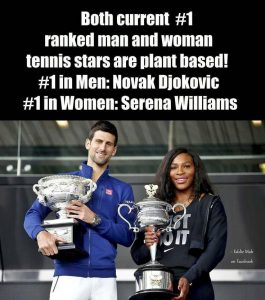 You won’t believe all the  professional athletes who have adopted a vegan diet, including the NFL legend quarterback Tom Brady, NBA stars Kyrie Irving and Chris Paul, ultra-marathoner Scott Jurek, silver medal-winning Olympic cyclist Dotsie Bausch, and tennis champions Serena and Venus Williams. Arnold Schwarzenegger is vegan, and the strongest man on earth, Patrik Baboumian, is, too. Watch Baboumian flip a car over in “Game Changers” and do a yoke-walk carrying 1,200 pounds. As his t-shirt says, he’s a “Vegan Badass!” They’ve all switched to a plant-based diet to put them at the top of their game. “Game Changers” also features interviews with elite athletes, sports doctors, cardiologists, and even a urologist who proves by clinical trial that a vegan diet has a very positive effect on men’s “manhood.”

I’ve been vegan for almost 30 years.  While I enjoy the health benefits, my motivation was to do what I could to put a stop to the cruelty, suffering and killing of animals. I’ve witnessed firsthand the shocking things done to animals on factory farms and smaller independent farms.  I’ve seen the chickens with their beaks sheared off so they won’t peck each other in crowded, stressful living conditions. I’ve seen the poor suffering dairy cows artificially inseminated in what the dairy industry calls “rape racks” to keep them pregnant and lactating their sad miserable lives. They’re then killed when their productivity declines. I’ve seen three-day-old male baby calves torn from their mothers’ sides to be shipped to veal farms where they are put into cages so small they can’t even turn around, then fed an iron-deficient diet to keep their flesh pale and tender. These and other horrors I’ve seen with my own eyes are why I try so hard to inform and educate others with my Saturday Facebook essays.

Whether you’re interested in helping putting an end to cruel suffering and death of animals or simply interested in improving your health and vitality, “Game Changers” is the must-see movie of the season.

Here is the USA Today article, which underscores the revelations in “Game Changers:”

Alex Morgan remembers athletes sporting milk mustaches in ads when she was a kid, reinforcing the idea that she needed protein from animal and dairy products to be strong. “I never thought it was possible I could be playing at an elite level as a professional athlete with a plant-based diet,” the U.S. women’s soccer star told USA TODAY Sports. “Then I realized it wasn’t detrimental at all. What I learned growing up just wasn’t true.”

When Morgan’s Orlando Pride teammates and the MLS teammates of her husband, Servando Carrasco, showed they could thrive while eating vegan, the stigma was erased and Morgan was ready to try a new diet. She became vegetarian in August 2017 and then took on a vegan lifestyle at the beginning of 2018.

What Alex Morgan and Chris Paul eat everyday is entirely  plant based.  “If anything, it makes me stronger and helps with fatigue and recovery,” said Morgan, who had the U.S. women team’s chef, Teren Green, prepare vegan meals during the World Cup, prompting several of her teammates to give it a try.

Veganism is on the rise in the United States — the plant-based market increased 17% in dollar sales this last year, according to The Good Food Institute — and more athletes are turning to the diet, particularly at the peak and latter stages of their careers.

New England Patriots quarterback Tom Brady is the most prominent football player to embrace veganism, crediting his plant-based diet for allowing him to play at an MVP level into his 40s. He made the change starting in 2014, and detailed his approach in his 2017 book, “The TB12 Method.”

Athletes have been exposed to plant-based diets for a variety of reasons. NBA guard Chris Paul said his children’s nanny was vegan.

Tennis star Venus Williams adopted a vegan diet in 2011 after she was diagnosed with an autoimmune disease.

A gluten allergy led Wimbledon champion Novak Djokovic to go plant-based, and in 2016 he opened up a Monte Carlo vegan restaurant.

While most nutrition experts are in agreement that veganism aids recovery and promotes good health, others raise questions about its effectiveness.  Yet athletes are among the biggest advocates for veganism.

Morgan and Brooklyn Nets guard Kyrie Irving were named “Most Beautiful Vegan Celebrities” by PETA this year. “The rules aren’t as strict as everyone thinks,” Irving told USA TODAY Sports. “I’m an example of someone who ate really unhealthy — fast food or a quick TV dinner in the microwave — without educating myself on what I was putting into my body. Now I feel like I understand the truth — how certain chemicals in meat and dairy affect your body, and that now there are alternatives bridging the gap available.”

Those alternatives start with plant-based meat companies such as Beyond Meat, which has attracted Paul, Irving and Houston Texans wide receiver DeAndre Hopkins as investors. You’ve got to be open-minded,” Paul said. “I was someone who was like, ‘I don’t want that fake chicken or fake burger.’ But it tastes similar and it really makes a huge difference in how I feel.”

James Loomis, who practices internal medicine at Barnard Medical Center in Washington, D.C., said he believes a vegan diet is a natural fit for athletes: “It leads to quicker recovery from workouts and better injury prevention. The food pyramid is misleading and that’s stayed with us from a young age. The standard American diet leads to low-grade inflammation so when athletes are exercising it’s like putting Diesel fuel into a regular car.”

Loomis disagrees, and has data to prove it. He collaborated with experts for a 2019 study that outlined evidence of plant-based diets benefiting endurance athletes in heart health, overall performance and recovery.

“It’s a factual myth that we have to have animal protein to perform at a high level,” he said. “With a plant based diet, food becomes more like medicine.”

Loomis is one of the doctors featured on “Game Changers,” a documentary that debuted in September that features MMA fighter James Wilks exploring the differences between protein from plant-based and meat-based diets.

“If you go into locker rooms and look at the pre-game meal, it’s usually steak or chicken or pasta, and there’s lots of Whey Protein powder,” said Loomis, the former team internist for the St. Louis Rams and Cardinals. “That’s then amplified commercially with marketing, basically saying, ‘You’re not a man unless you eat meat.’”

Times are changing. Brady appeared in a 2002 Got Milk? ad. Nowadays he’s promoting his own plant-based protein shakes.

Silver medal-winning Olympic cyclist Dotsie Bausch became vegan in her mid-30s — three years before the 2012 London Games — and appeared in an anti-milk commercial for her non-profit, Switch4Good, during the 2018 Winter Olympics.

“Most people have meat and dairy because the next person does it,” Bausch said. “The truth is milk doesn’t make you grow big and strong.”

Chris Paul’s personal chef, Seong Hwang, prepared a post-game meal for the Houston Rockets last season. He didn’t tell players until afterwards that it was made with Beyond Meat.

“The players, the staff, they all loved it solely based on the taste,” Seong said. “No one wants to give up taste. Chris is a big foodie. If what I was making him didn’t taste good, he wouldn’t stick with it. Whenever you hear veganism, you think you have to give up something or eat tofu to survive. That’s really not the case.”

The vegan perception can be damning, though. According to a 2017 report by NBC Sports Bay Area, NFL teams were dissuaded by Colin Kaepernick’s vegan diet, calling it a red flag when considering signing the free agent quarterback.

“There’s a weird connotation that comes with veganism,” said Loomis, who moved his practice to Washington, D.C., from the St. Louis area because colleagues in the Midwest thought his approach was “crazy.”

Morgan says the stigma can go both ways.

“It took me a while to feel comfortable with my lifestyle,” said Morgan, who also supports veganism because of ethical concerns around animal rights. “The vegan community can be very unforgiving at times, and I don’t want to sit here and say I’ve never eaten dairy or worn leather. But I haven’t eaten meat or dairy in two years and do the best I can.”

“I just want to feel good about why I’m doing this. I don’t think our country is there yet, in terms of being able to adopt a fully vegan lifestyle, but we’re getting there.” 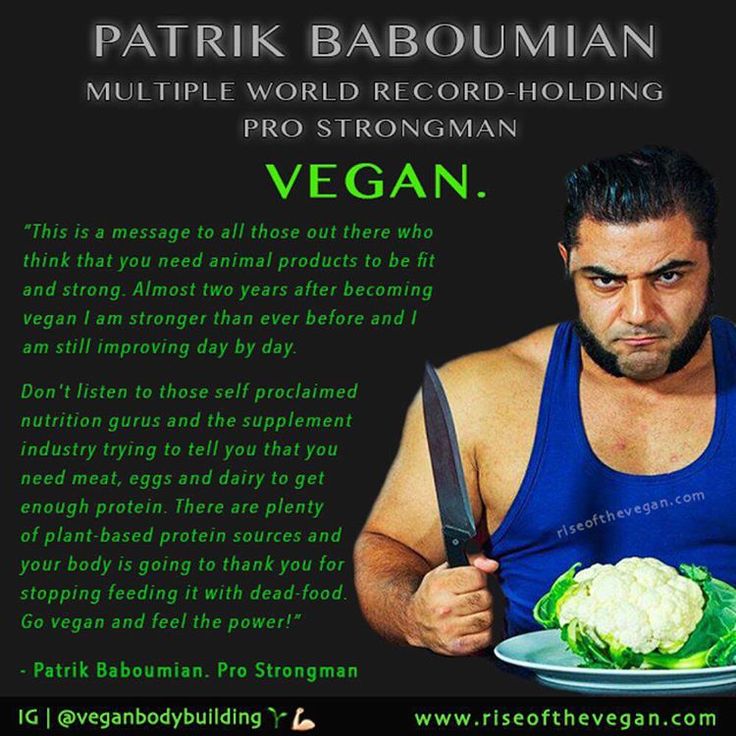