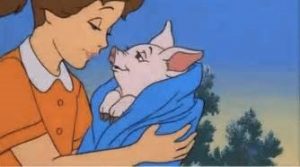 Here I am with Wilbur in the animated movie “Charlotte’s Web.” The movie had an all-star cast: Debbie Reynolds voicing Charlotte the spider, Paul Lynde as Templeton the rat, Henry Gibson as Wilbur the pig, and Agnes Moorehead as the Goose. Then there was me; I did the voice of Fern, the little farm girl who saves Wilbur from her father’s axe!

The reason why I love this film so much is that it’s really an animal rights film. “Charlotte’s Web” depicts all the animals as having unique personalities as well as having the capacity to feel pain, sadness, fear, joy, and happiness. If you’ve never seen it, watch the movie on Netflix and you’ll understand exactly what I’m saying!

The movie opens with me as Fern, eating breakfast and seeing my father carrying an axe out to the barn. “Where’s Papa going with the axe?” I ask my mother, and she tells me a litter of piglets were born the previous night and he was going to kill the “runt.” I race to my father in tears, hoping to stop him. In my most favorite line from the movie, I ask him, “If I had been born a runt, would you have killed me?” And so begins the film and Fern’s and Wilbur’s loving, compassionate relationship.

I didn’t know at the time how horribly pigs are treated then killed to produce pork, but I had an innate sense that animals should not be killed, exploited or abused for a human’s pleasure. As Plutarch aptly expressed it, “But for the sake of some little mouthful of flesh we deprive a soul of the sun and the light, and that proportion of life and time it had been born into this world to enjoy.”

There’s an animal rights group in Los Angeles that waits outside an enormous slaughter facility where truckloads of poor, suffering pigs are brought to be butchered. When the trucks stop at the entrance, activists offer water to the pigs they can reach. The pigs are completely dehydrated, their skin burned from the long, grueling trip, and packed in the trucks so tightly they can’t even turn around.

Did you know that pigs are highly intelligent animals? Not that that should matter, but they are. Some very ignorant people believe pigs are dirty, but this is not true. The reason pigs love to take mud baths is that their skin, which is very sensitive, has no sweat glands, so the only way they can cool down is to roll in the mud. Wouldn’t you roll in something cool if you were unable to sweat?

Pigs are clever animals, as well as friendly, loyal, and intelligent. They are naturally very clean and avoid soiling their living areas. When they are not confined on factory farms, pigs spend hours playing, lying in the sun, and exploring their surroundings with their powerful sense of smell. On modern factory farms, these outgoing, sensitive animals spend their entire lives in cramped, filthy warehouses under the constant stress of intense confinement, denied everything that is natural and important to them.

Mother pigs – sows – spend most of their miserable lives in tiny gestation and farrowing crates so small that they can’t turn around. They are impregnated again and again until their bodies give out and are then sent to slaughter. Piglets are torn away from their distraught mothers just a few weeks after birth. With no painkillers to ease their suffering, their tails are chopped off, the ends of their teeth are snipped off with pliers, and the males are castrated. The young pigs then spend their short lives in cramped, crowded pens atop slabs of filthy concrete.

When the time comes for slaughter, pigs are forcibly herded onto transport trucks that often travel for many miles exposed to all manner of weather. Many pigs die from heat exhaustion in the summer or arrive frozen to the inside of the truck in the winter. According to industry reports, more than one million pigs die in transport each year, and at least 40,000 sustain injuries by the time they arrive at the slaughterhouse. There at the slaughterhouse, due to improper stunning methods, many pigs are still conscious when they are dumped into tanks of scalding-hot water, which is intended to remove their hair and soften their skin. For more information, please see PETA’s eye-opening article on factory farming pigs.

What can you do to help put an end to this cruelty? The best way is to switch to consuming vegan foods. Please consider ordering PETA’s free vegan starter kit, which contains great tips and free recipes to help you make the transition to animal-friendly eating.

I became vegan over twenty years ago after reading the books The Case for Animal Rights by Dr. Tom Regan and Diet for A New America by John Robbins, and by watching videos showing animals in factory farms and slaughterhouses. So gruesome were the images I saw, I could barely keep watching. Everything I read and saw confirmed to me that not only do animals have the capacity to suffer, they do – horribly. I decided I simply couldn’t continue to participate in something that inflicts such suffering upon poor, innocent animals.

From the time I was very young, I remember feeling sorry for the animals I saw or heard about being treated cruelly. I remember, too, when playing the voice of Fern in the animated movie “Charlotte’s Web,” how I felt reading the wonderful words of author E. B. White about animals having personalities, and experiencing fear, anxiety, and happiness. Whether it was an animal I was working with on a set or my own animals I cared for growing up, looking into their eyes, how could I deny that animals feel the same emotions we humans feel?

Although I was only 12 years old, when Fern sang her love song to Wilbur the Pig, it touched me to the core. Fern loved Wilbur, and rightly so. Pigs, like all other animals, including chickens, sheep, and cows, are smart and sensitive. Many people think of pigs as dirty, but if they would visit sites like adaptt.org and veganoutreach.org, they would learn a great deal of new, revealing information about animals that may make them rethink their own dietary and lifestyle choices. Did you know, for example, that pigs have very sensitive skin and burn easily from the sun, so, just as human animals put on protective sunscreen, pigs roll in the mud to keep cool and protect their skin? Pigs, like other animals, should be respected and not exploited or abused. Instead they are horribly abused in factory farms and slaughterhouses, their throats cut, and their still living bodies hung upside down to bleed out, to be cut up and delivered to meat packing plants.

Poor dairy cows are artificially inseminated by a machine known in the industry as a “rape rack,” and kept pregnant their whole miserable lives, pumped constantly for milk until they collapse of brittle, calcium-depleted bones, then trucked in hot boxcars to the slaughterhouse. Every time a dairy cow gives birth, her babies are taken away from her, their umbilical cord still hanging, to be shipped off to “veal farms.” There, they are chained by the neck so they can’t move and fed an anemic diet, so that their flesh is tender and white when they are slaughtered, still in infancy, to be processed as veal.

Dairy is an extremely cruel industry. Did you know “human animals” are the only animals on the planet who consume another species milk after being weaned from their mother? How bizarre is that? I drink almond or soy milk and enjoy vegan cream cheese, vegan mayonnaise, and other vegan cheeses. I could go on and on. Google vegan substitutes for ANY animal product and you will find awesome alternatives.

Finally, a word or two about Charlotte herself, played so beautifully in the film by the late Debbie Reynolds. Charlotte demonstrates that spiders are clever creatures, spinning magnificent, complex webs, something completely beyond the ability of humans. Like other animals, Charlotte the spider protects her babies with love and care. Even spiders ought to be respected!

If you really want to see a movie with heart, soul, humor, and beauty, do get a copy of the animated version of “Charlotte’s Web” starring Debbie Reynolds, Henry Gibson, Paul Lynde as a hilarious rat, Agnes Moorhead, and yours truly. Better still, watch it together with your children or grandchildren.

And if you want to learn more about opposing animal cruelty and choosing compassion (and better health, as well), please visit adaptt.org and get the brochure “Why Vegan” from veganoutreach.com.

If you’re interested in watching some awesome documentaries about how to start the process towards veganism, see “Cowspiracy,” “Forks Over Knives,” and “What the Health.” For an even larger selection, go to nutriciously.com/best-vegan-documentaries/