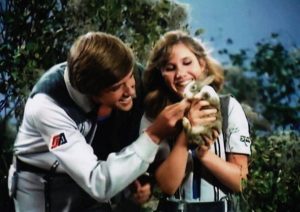 In this scene from “Space Academy,” Ric Carrott and I are getting to know a tiny rabbit. I remember that scene very well. When the rabbit was brought onto the set, he was shaking badly, and I refused to shoot the scene with a frightened animal. While everyone waited, I picked up the rabbit and held him, stroking him and talking to him until he grew calm and relaxed. Only then could we get back to work and film that scene. 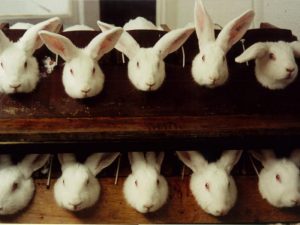 Did you know that July 15 – July 21 is Rabbit Awareness Week? Did you also know that, because of their gentle temperament and ease of confinement and breeding, more than 170,000 rabbits are killed or mutilated every year in U.S. product testing labs?

Despite the availability of more modern, humane, and effective alternatives, rabbits are still tormented in the notorious Draize eye irritancy test, in which cosmetics, dishwashing liquid, drain cleaner, and other substances are dripped into the animals’ eyes, often causing redness, swelling, discharge, ulceration, hemorrhaging, cloudiness, or blindness. After the experiments are over the rabbits are killed. In addition, even though internationally-accepted non-animal methods exist, rabbits’ backs are shaved and corrosive chemicals are applied to their raw skin in skin 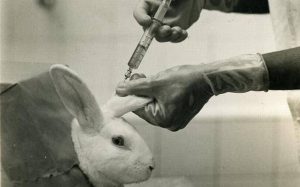 corrosion tests and left there for up to two weeks. These chemicals often burn the skin, leading to tissue damage. The victims of these tests are given no pain relief during this excruciatingly painful experience and, again, after the test is finished, they are killed. 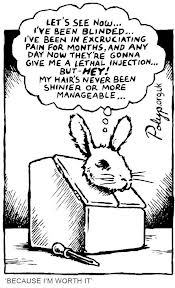 Horrific experiments like those above are also being done to cats, dogs, mice, rats, primates, and other animals in laboratories around the world. Please say NO to vivisection and boycott any products that have been tested on animals. Shop instead for products packaged with the symbol that says, “NOT TESTED ON ANIMALS.”