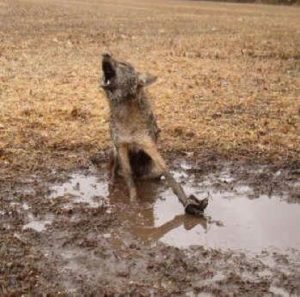 A mother searches through the forest for food. Her babies are back in the den, safe for now but hungry, and even though its cold she must leave them, if only for a while, to keep them fed. Spotting something in the brush she cautiously approaches for a better look.

CRACK! CRUNCH! With the speed and force of hundreds of pounds of spring-loaded pressure, the six-inch steel jaws of a leg-hold trap snap shut, shattering the bones in her foot making her unable to escape the horror. The mother howls in dire pain and fear. The trap is anchored to the ground by a short chain and metal spike, so she can’t even drag herself away. She is trapped and will never see her babies again.

The fur farmer will eventually go into the woods and check his traps and if she is still alive, dash out her brains with a club – a bullet, after all, would damage the pelt and that’s the last thing a fur trapper wants; he must preserve the pelt so that women and men can wear these murdered animals as a fashion statement. But hours or days may pass, and she slowly dies in agony from exposure, dehydration, or blood loss. Knowing her babies wait back in the den, she tries to chew off her own leg to get to them. If she is successful, she will die anyway. Without their mother, her babies will soon die, too. A family will be cruelly killed so that someone, somewhere may have a pair of fur-lined gloves, a jacket or a decorative muff. 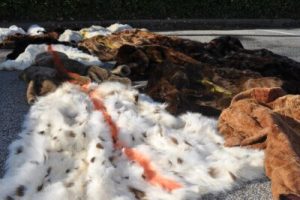 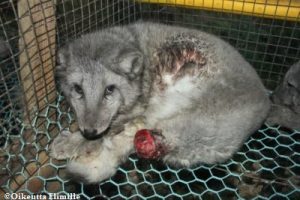 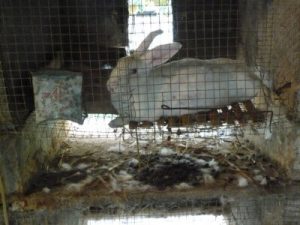 One-third of all fur sold in the US comes from animals killed in steel-jaw traps, such as the one described above. The fur farmers set out these traps in the woods. The heavy steel traps slam shut on an animal’s limb, shattering the bone, which causes excruciating pain and leaves the animal stuck and starving, sometimes for days.

The huge conibear trap crushes an animal’s neck by applying 90 pounds of pressure per square inch, leaving the animal to suffer for up to eight minutes while he or she slowly strangles to death. These sadistic traps are set not only on land, but are also positioned at the bottom of shallow ponds to kill beavers who swim by building their homes or collecting aquatic plants to feed their families.