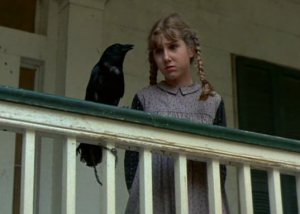 In the movie “The Beguiled,” starring Clint Eastwood and Geraldine Page, I played Amy, a tender-hearted girl who loves and nurtures animals. Early in the movie Amy is seen tending to a wounded crow. The crow, whose wing has been injured, is tied to the railing of a balcony so he can’t fly away until he has fully recovered. “I love ya, Mr. Crow,” Amy says as she tries to comfort the struggling bird, “but until your wings are mended, it’s for your own good.” The scene foreshadows the plight of Eastwood’s character, McB, as he recovers from his injuries in the boarding school. 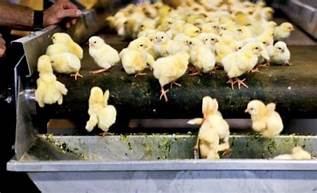 When I think about birds now I think about the horrific abuse birds – chickens, ducks, and others – endure on egg-laying farms. Egg farms continually breed birds so they have a fresh supply of hens to lay eggs. After two years spending their lives in horribly cramped conditions inside huge warehouses, the hens stop laying enough eggs to cover the cost of their feed and are shipped to the slaughterhouse.

If chicks in the hatchery turn out to be males (who, of course, don’t lay eggs), they’re considered useless by-products. Those poor baby birds are tossed ALIVE, cheeping pitifully for their mothers, into the trash, or thrown ALIVE into rendering machines to be ground up and used as feed for other animals. 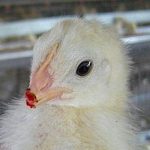 Female chicks have part of their beaks painfully cut off while fully conscious, because egg-laying hens are forced to live in such crowded conditions they peck at each other. This is why I don’t eat eggs, or any other animals for that matter. Birds such as “broiler” chickens and egg-laying hens are made to live such miserable and painful lives that I simply cannot ethically eat their abused corpses.