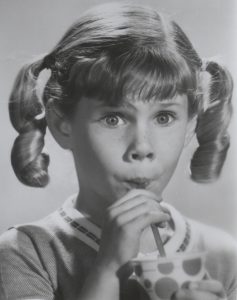 Here I am at the age of seven modeling for a soft drink ad. I can’t help but have mixed feelings about this image. On the one hand, my picture was being used to encourage people to buy sugary soft drinks, something I would never do today, but on the other hand, at least I’m not using a plastic straw. Today we understand that disposable plastic straws and other plastic waste have contributed to the pollution of the Earth’s oceans and the deaths of millions of sea animals.

A massive tangle of human-generated plastic waste called the Great Pacific Garbage Patch, twice the size of the state of Texas, floats in the ocean between California and Hawaii. Similar patches cover other parts of the Pacific, Atlantic, and Indian Oceans, and the Caribbean Sea. These enormous islands of plastic trash cover an increasingly large portion of the earth’s ocean surface.

Maybe you’ve seen the photos of sea turtles grown deformed, stuck in the plastic rings from a six-pack of beer, or dead fish washing up on beaches, their digestive systems clogged with plastic microfibers. Perhaps you’ve seen dolphins tangled in discarded plastic commercial fishing lines, or pelicans, their crops full of plastic bottles and bags. 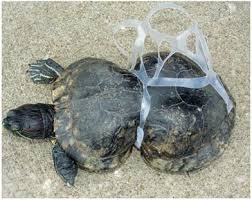 Fish, turtles, mammals, and seabirds suffer pain and illness from ingesting plastic. Plastic ingestion also reduces the storage volume of their stomachs, causing starvation. It’s estimated that 60% of all seabird species have eaten pieces of plastic, with that number predicted to increase to 99% by 2050. 100% of sea turtles have plastic in their digestive systems. Marine mammals also ingest and get tangled up in plastic, leading to the decline of already endangered species like monk seals and stellar sea lions. Dead whales have been found with bellies full of plastic. 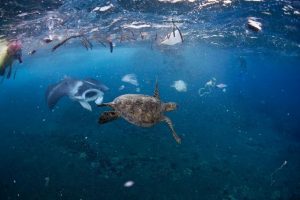 The following facts shed more light on how plastic waste is killing wildlife all over the world: 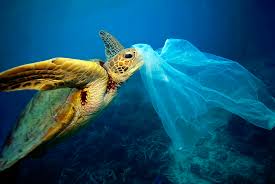 Cities, counties, and states from coast to coast have begun to join the world’s nations in banning single-use plastic goods to curb the rate at which we are poisoning our oceans. This summer Stafford Township, New Jersey, and Santa Barbara, California, joined others in banning plastic bags, wrappers and drinking straws. Recycling hasn’t helped; most of these items are discarded by thoughtless consumers rather than recycled. 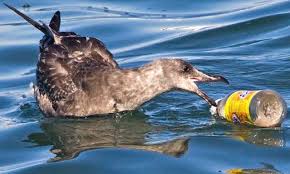 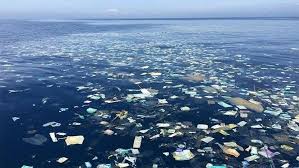 It’s not hard to avoid or cut down on using disposable plastic. Instead of buying juice in a plastic bottle, buy it in a cardboard container. Instead of using plastic utensils when you eat at a fast food restaurant, bring your own washable, reusable utensils. How about using wooden chopsticks? Keep a few biodegradable straws in your car; paper, bamboo, and reusable straws are readily available in many places, including on Amazon. Become more aware of all the plastic you use and look into environmentally-friendly alternatives. Let’s take back our oceans from thoughtless individuals and profit-hungry corporations who don’t care about the destruction of life on our planet. 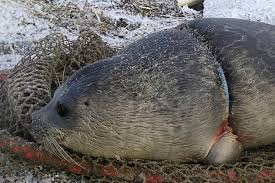