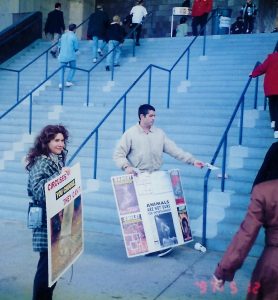 That’s me at left, protesting the cruel treatment of animals at a California circus in 1997. This year, 2020, California joins Hawaii, New Jersey, and New York City in prohibiting circuses from using wild animals as entertainment. Hopefully, the entire United States will soon do the same.

A bill that bans the use of wild animals in traveling circuses has been introduced in Congress. Traveling circuses fall under the jurisdiction of the Interstate Commerce Commission, a federal agency, and thus Congress has the authority to make laws that apply to the treatment of circus animals. The bill before Congress now would amend the Animal Welfare Act,a law that has monitored human treatment of animals in research, transport, entertainment, and more since 1966.

The bill’s website explains the “adverse effects” of captivity and transport on animals used for entertainment. “Due to severe confinement, lack of free exercise, and the restriction of natural behaviors, animals used in traveling circuses suffer and are prone to health, behavioral, and psychological problems,” it explains. It adds that law enforcement authorities struggle to monitor circuses effectively due to their mobility, meaning the “brutality” faced by animals often goes undocumented. As the website says, “Congress has a responsibility to protect the welfare of animals and ensure public safety.”

A Democrat, Raúl Grijalva of Arizona, and a Republican, David Schweikert, also of Arizona, are co-sponsors of the bill. If Democrats and Republicans can see eye-to-eye on a matter of such grave importance, shouldn’t the bill to ban the cruel exploitation of animals in circuses be something everyone can get behind?

Please write your Representative and urge him or her to support the bill. Thank you.