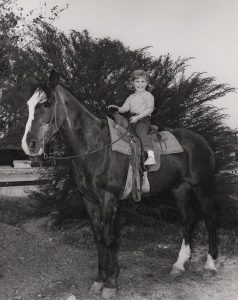 Here I am at the age of 4 or 5 up on a very large horse!! I might be smiling but, boy, was I scared. I didn’t have to be; horses, like many large mammals, are gentle giants. But maybe because I was so tiny, I felt really frightened. I was able to cover up my fear because at 6 I got a part where I rode one on an episode of “Branded,” starring Chuck Connors. I was around horses while filming the movie “The One and Only, Genuine, Original Family Band,” as well as the Walt Disney TV movie, “Smoke,” starring Ronny Howard. When filming the series “Lassie,” I rode a horse regularly; by that time I was pretty much over my fear of riding.

As an adult, I completely overcame my fear of horses and learned a lot about them in the process. Horses are herd animals. They naturally want to be around other horses, graze in meadows, trot great distances, play and court, but they suffer greatly when used to pull carriages around busy city streets, as in New York, or are made to race around tracks. 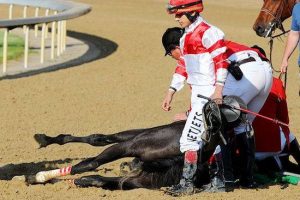 Behind the romanticized façade of thoroughbred horse racing is a world of injuries, drug abuse, gruesome breakdowns, and slaughter. Horses who weigh at least 1,000 pounds are supported by ankles the size of a human’s, and are forced to run around dirt tracks at speeds of more than 30 miles an hour while carrying a rider on their backs. Celebrated filly Eight Belles was euthanized on the track after breaking both front ankles during the 2008 Kentucky Derby; her poor ankles couldn’t sustain her running that fast. At another race, a horse named Appeal to the City hemorrhaged around her eye when jockey Jeremy Rose “engaged in extreme misuse of the whip.” In his Kentucky Derby win, American Pharaoh was struck with a whip at least 32 times by jockey Victor Espinoza. Pushed beyond their limits, most horses are subjected to cocktails of legal and illegal drugs intended to mask injuries and artificially enhance performance. 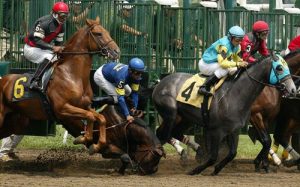 Racehorses are the victims of a multi-billion-dollar industry that is rife with drug abuse, injuries, and race fixing, and many horses’ careers end in slaughterhouses. Horses used for racing are forced to sprint — often under the threat of whips and even illegal electric-shocking devices — at speeds so fast that they frequently sustain injuries and even hemorrhage from the lungs. While spectators show off their fancy outfits and sip mint juleps, horses are running for their lives.

I hope all who read these posts learn something they didn’t know about animals and share them with their friends and co-workers. We all need to stand up and be a voice for the voiceless. 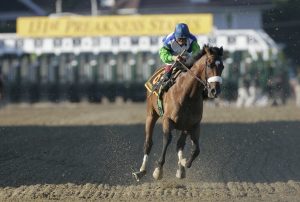