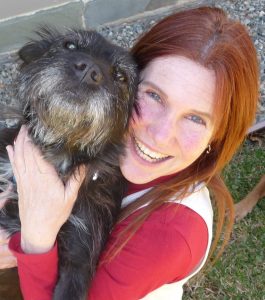 Here’s a photo of me and Muttley, rescued from a municipal shelter in the nick of time, and a member of my family for ten years.

On January 1, 2019, California became the first state to prohibit pet stores from selling dogs, cats, and other mammals unless they were acquired from a shelter, rescue group, or public animal control agency. Under the new California law, pet store operators must be able to prove the origin for animals in their store or be fined $500 per animal.

Most animals sold in pet stores come from mass-breeding facilities that churn out hundreds of thousands of animals every year in deplorable conditions. At these “puppy mills,” “breeding stock” are artificially inseminated again and again to keep them permanently pregnant or nursing. Due to stress and physical exertion, their lives are often short. Their young are typically taken away at a very early age, packed into crates, and trucked or flown hundreds of miles – often without adequate food, water, or ventilation – to brokers, who then sell them to stores. Some of the animals don’t survive the grueling journey. 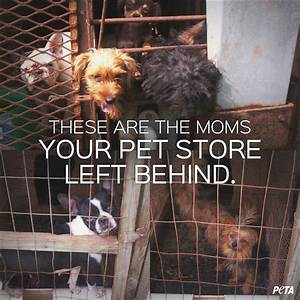 This is a serious and long overdue blow to those evil breeding mills. Animal advocacy groups have fought and uncovered horrific conditions at breeding mills for years, including those at Holmes Farm, a huge Pennsylvania animal mill that supplied PetSmart, Petco, and others. Undercover video taken there documented that animals were kept in stacked plastic bins, denied veterinary care, and routinely frozen alive and gassed by the dozens. Holmes Farm was raided by agents of the U.S. Department of Agriculture and is now under federal investigation.

Another good reason to put these breeders out of business? Purebred dogs and cats suffer from significantly higher rates of physical abnormalities and congenital defects. Over-breeding has saturated gene pools with those for deafness, heart ailments, and other physical disorders. The healthiest and most robust dogs and cats are mixed-breeds, or mutts, and they’re oh so cute besides. Every animal is beautiful in his or her own right, not just those with AKC-certified bloodlines! 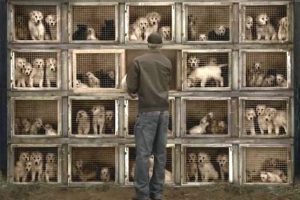 California is the first to have such a law enacted statewide, but there are similar laws restricting pet store sales in towns and cities across the country. If where you live isn’t on the list, I urge you to contact your state and local legislators to push for similar legislation.

As good news as the California law is for putting an end to breeding mills, it’s still not cause for celebration. Don’t forget that every time someone buys an animal from a pet store, they are condemning another in a shelter, waiting to be loved, to death. Pet store animals will be there until someone buys them, but shelter animals are given a only a brief window of opportunity to be adopted; those that aren’t are put to death. As Public Relations Director for New York’s Center for Animal Care and Control I witnessed beautiful, healthy dogs and cats held down, injected with an asphyxiating drug, and tossed into a refrigerated room to be taken away by garbage trucks. It’s heartbreaking and sickening. Make shelter animals your first choice in adoption, and, remember, always have your animal companions spayed or neutered. 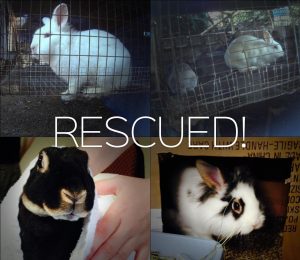