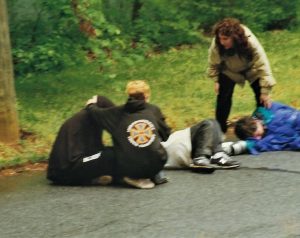 In 1997 I traveled to Emory University in Atlanta, Georgia, to participate in a demonstration against the sadistic torture of animals at the Yerkes National Primate Research Center, a 25-acre compound on the Emory campus. More than 10,000 animals, mostly monkeys and small apes, are held captive there, and inflicted with some of the worst pain and abuse humans can dream up, including removing the top of living animals’ skulls to expose or extract the brain, and infecting them with diseases such as malaria, herpes, and AIDS. The motivation is not legitimate scientific research but simply morbid curiosity – how much pain can a monkey endure, for example, before he dies of stress and despair? To hide this chamber of horrors from the public, the Yerkes Research Center is built like a fortress; visitors are definitely not welcome. 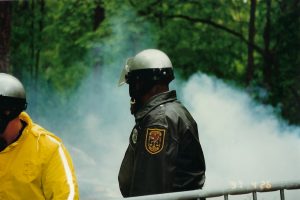 As my husband and I and 200 others marched along a road behind the Yerkes Center, we were tracked by a police helicopter while dozens of policemen in full riot gear set up a barricade. When the marchers reached the barricade, the police began spraying them with mace and launching tear gas cannisters. As a clinging, searing cloud of gas spread across the road, demonstrators pushed aside the barricade to escape. That was the signal for the gas-masked police to wade into the crowd, swinging clubs and making arrests. Going into nurse mode, I did what I could to help the fallen until I, too, was blinded by the burning gas and fell along the roadside. A woman came to my aid, pouring her water bottle out over my eyes. Once I was able to see, I searched the chaos and confusion for my husband. I found him lying blinded in the road and, borrowing a bottle of water from someone, flushed his eyes. Fighting for justice comes with risks and free speech often comes at a price. Still, our temporary suffering that day was no match for the horrors inflicted every day on the animal prisoners at Yerkes. 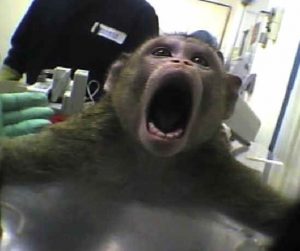 The Yerkes National Primate Research Center and six other taxpayer-funded centers just like it are still up and running, blazing a trail of agony, torment, and death for the animals imprisoned in their laboratories. The trail they haven’t blazed is the one toward marketable vaccines, treatments, or cures for the illnesses that plague humans. The FDA admits that 96% of new medications and vaccines developed in animals fail in human studies (Cambridge Quarterly of Healthcare Ethics, October 2015). Decades of experiments on monkeys at these institutions have also failed to produce promised vaccines for HIV, malaria, tuberculosis, and the Zika virus. 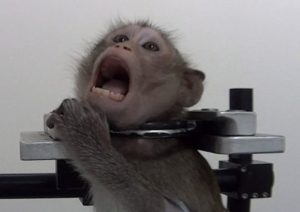 Pfizer, Moderna, and Johnson & Johnson, the companies that developed the COVID-19 vaccines, have publicly acknowledged that animals are not useful models for vaccines, that mRNA vaccines work very differently in animals compared to humans, and that not a single monkey bred at any of the NPRCs was used to bring those vaccines to the public. Think about it: American taxpayers have been funding the torture, mutilation, and killing of animals at these NPRCs for 60 years, yet when a vaccine was desperately needed to protect the public from a deadly pandemic, not one animal or scrap of data from the NPRCs was used in its development. from the NPRCs was used in its development. 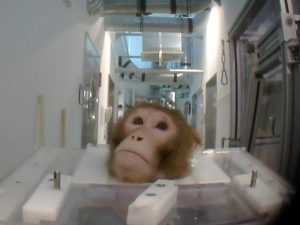 Congress is considering a proposal right now to boost funding of the NPRCs by 27% for fiscal year 2022, an increase of nearly $30 million. Suffering animals need your help immediately. Please urge your representative in Congress to vote against this disastrous proposal. It doesn’t matter if you’re Republican or Democrat, liberal or conservative, red or blue, is this how you want your tax dollars spent?