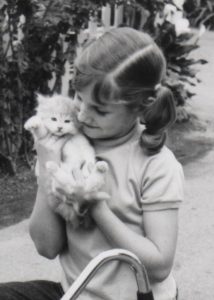 Hooray for New York, which this week became the first state to pass legislation banning the declawing of cats. California, New Jersey, and Massachusetts are considering similar bans. Declawing is already banned in some cities, including Los Angeles, San Francisco, and Denver.

Cats’ claws are a vital part of their anatomy and their instinctive behavior. They use them to escape from other animals or people who are hurting or threatening them. Cats claw to have fun and exercise, to maintain the condition of their nails, and to mark their territory. They stretch by digging their claws in and pulling against their own claw-hold.

Declawing of cats, or onychectomy, is not at all like clipping 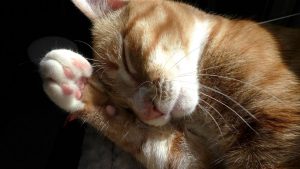 your fingernails. It is the amputation of the last bone, including the nail bed and claw, on each front toe. It is the same as cutting off each of your fingers at the first knuckle. Declawing is serious surgery and puts a cat at risk of adverse reactions to anesthesia, gangrene, hemorrhaging, permanent nerve damage, persistent pain, difficulty walking, scar tissue formation, bone fragments, and skin disorders. After surgery, the nails may grow back inside the paw, causing pain but remaining invisible to observers. Declawing results in a gradual weakening of leg, shoulder, and back muscles, and because of impaired balance caused by the procedure, declawed cats must relearn to walk, much as a person would after losing his or her toes. 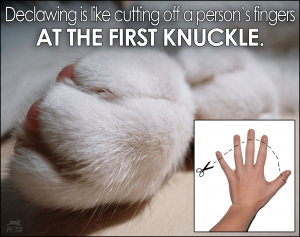 Without claws, even house-trained cats may urinate outside the litter box. Declawed cats may be morose, reclusive, and withdrawn or irritable, aggressive, and unpredictable. Many people think that declawed cats are safer around babies, but in fact, the lack of claws, a cat’s first line of defense, makes many cats feel so insecure that they tend to nip more often as a means of self-protection. Declawed cats often develop behavioral problems that eventually lead to their being dumped at animal shelters and killed.

Peace to all the animals with whom we share this planet! 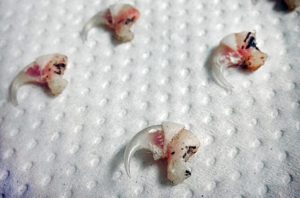 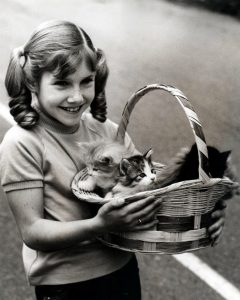 Here I am with my cat Tigger’s litter of kittens. I watched them being born. I didn’t realize when I was young how vitally important it is to spay/neuter your companion animals. I certainly do now!

Every time someone buys their new best friend from a breeder or pet store, or allows their companion animal to have a litter, other dogs, cats, puppies, and kittens are killed in animal shelters. As I’ve described for you before, I have seen with my own eyes doggies (and cats, too) lined up, their little legs quaking, and forced into the “kill room,” where they are held down as they struggle to get free and given a lethal injection. Their poor, pitiful bodies, sometimes still alive, are then thrown into a freezer. When the corpses pile up, garbage trucks come and take them to a processing plant where they are fed into an enormous grinder to be ground into pet food or sold as fish food in Pacific Rim markets. 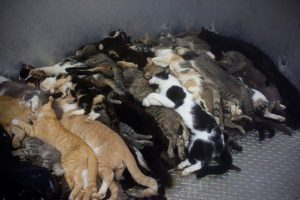 If everyone who wants to share his or her home with a dog or cat would adopt from an animal shelter or rescue organization, we wouldn’t be killing upwards of five million healthy, happy dogs, cats, puppies, and kittens in US shelters every year. Most animal shelters in the US are merely death camps for companion animals. Animals in shelters are waiting desperately to be taken home by someone who will give them love and affection. Did you realize that chickens, pigs, hamsters, and all kinds of animals – each one hoping for a safe and loving home – can be adopted from your local shelter? 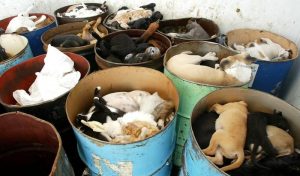 A friend of mine wrote a story about her experience with adopting cats from a shelter. I’d like to share her story with you now.

“I decided that I was ready to adopt an animal companion while I was living in a Chicago studio apartment. I had just graduated from college, and at the time, I knew that I had the space and resources to open my home to two cats.

“Once I decided that I could provide a pair of cats with their forever home, I diligently researched each animal shelter in my area until I found one that I wanted to adopt from, and just in case I needed to make an appointment, I called ahead. 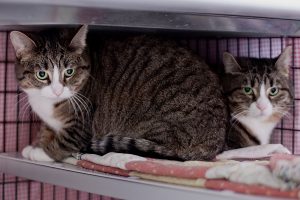 “Turns out that most animal shelters are so eager to find happy homes for their animals that appointments aren’t necessary. I arrived at the animal shelter on a busy Saturday and was shocked by the number of kittens who needed homes. It was early summer, and many of the cats were only a few weeks old. They had been abandoned at the animal shelter by people who hadn’t bothered to spay or neuter their own feline companions, and after the cats became pregnant, their human guardians were unable to take care of the babies or find homes for them.

“After telling an employee of the animal shelter that I was looking to adopt two cats, she walked me over to a cage where two black kittens were nestled against each other. One of the cats was male, and the other was female. The male had been the biggest cat in his litter, and long after the rest of his brothers and sisters were adopted, he’d been left behind.

“The female was a recent arrival to the animal shelter; she had been found in an alley behind someone’s home. Initially I thought that I was going to be bringing home two adult cats who were already set in their ways – I wanted to know right off the bat what I was getting myself into! But after spending a bit of time with the young pair at the animal shelter, I knew that I was taking them both home with me. 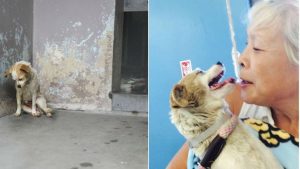 “Over the past six years, the female, Twila, has grown into a mischievous cat who gets into everything. She jumps onto shelf tops and walks around glass figurines as if she’s a tightrope walker. She climbs into open draws just to see what’s inside them. The male, Bulldozer, prefers to curl up in bed next to me as I read. But he can be feisty, too. If he thinks that it’s time for you to pet him and you ignore his coy advances, he isn’t shy about using his teeth to nip lightly and let you know that he’s craving attention.” 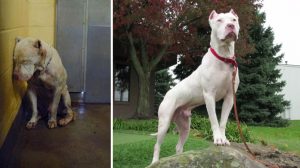 I hope that you’ll remember that it doesn’t matter if you are longing for a loving pair of animals, a gentle friend who has been waiting in a cage, or a pair of kittens you are ready to grow old with, the best place to find a loving, caring companion year-round is your local animal shelter. 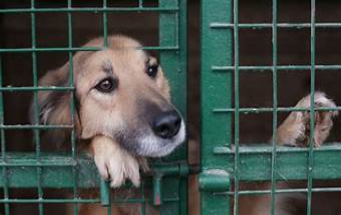 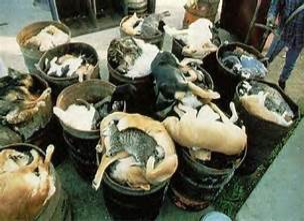 Who is responsible? Why DO animals die? The  responsibility for the mass execution of animals in our shelters each year is shared by us all. It is the fault of one uniquely powerful, incredibly myopic and self-centered species, the human. Many of us treat animals like a cheap commodity and take them for granted. They are not accorded the intrinsic value they deserve; the value that a caring, compassionate person may begin to understand if you look into the eyes of all animals. But there are three things that you can do to prevent these unnecessary deaths.

First, we must all be aware that breeding equals killing. There is no adequate justification for the purposeful or accidental breeding of any owned companion animal no matter what the commercial value. Spaying and neutering is a responsible step to prevent companion animals from giving birth to more and more puppies and kittens. It’s not only healthier for the  individual animal, but it will help stop the killing of those in the shelters. There are low-cost spay/neuter facilities if a person can’t afford to pay the usual $80.00 it costs to spay or neuter a companion animal. Also, most shelters will spay and  neuter the adopted dog or cat before they are taken home by their new family. With the advent of “early spay/neuter programs” a puppy or kitten can be neutered  starting as early as eight weeks of age.

Secondly, only go to an animal shelter or rescue to adopt your next best friend, NOT to a pet store or breeder. Behind the facade of the pet store window is hidden the gruesome puppy mill industry. Within these breeding farms, puppies endure extreme deprivation during their first weeks of life. At six to eight weeks of age, puppies are crammed two to a crate and shipped to any of the thousands of pet shops across the country. These puppies, jostled from truck to truck and finally to air cargo bays, may endure days in transit. The adult dogs who are used to produce the “cash-crop” of puppies are forced to spend their entire lives in cramped cages or pens. And because profit is the ultimate goal of the puppy mill owner, these poor breeding dogs are kept in conditions that will barely keep them alive and producing. When the adult females are so worn out from giving birth to litter after litter, she is killed because she is no longer profitable to the puppy mill owner.

Even AKC breeders who let you see their facilities are in fact putting a price on the heads of animals who look a certain way and have a certain bloodline. But how can a person base a dog’s or cat’s worth by these criteria? That’s what the Nazis did in Germany. They placed a high value on an individual only if they had blond hair and blue eyes and were of the “correct” bloodline; all other individuals were “worthless.” A dog or cat’s value is NOT in what their AKC papers say; each dog or cat is a unique individual. And those dogs and cats, puppies and kittens who are waiting at your local shelter to be rescued and given a chance at life will be killed if  people continue to frequent pet stores and breeders. 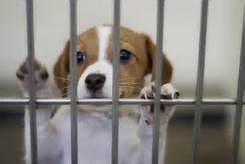 Last but certainly not least, the hope for the animals is to be found in a human culture which learns to feel   beyond itself. We must learn empathy, we must learn to see into the eyes of an animal and feel that it’s life has value. Nothing less will do.